Finally training course raised a lot of interest in Italy 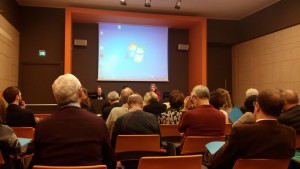 Finally training course was presented in Italy in various contexts and raised a lot of interest. First, it was presented at Caritas Bergamo and at the Municipality of Romano di Lombardia. They work in Sinti authorized camps but also considered the course materials very useful for working with newly arrived refugees who are entering social programs.

Second, it was presented to the social workers of the organization La Piccola Carovana, in Bologna and their collaborators in the Municipality of Bologna department for Adult Social Services. These services work with Roma who carry out informal activities in the city area and with homeless people.

Third, the project and its results was presented to the team of Padri Somaschi, which is an Italian organization that carries out social services in most of the authorized Roma settlements in Milan. They too considered it would be very useful to apply such a program with their clients, who need support in managing all the financial aspects of their relationship with social services.

Fourth, the products were presented at the conference of Lega Consumatori. The Consumer’s League is a national organization that is active in the field of financial education and information to the citizens. Our project received appreciation also from the Italian Bank Association, who hosted and participated in the conference. Finally project was present with a desk for distributing promotional materials.